The heavens may have opened over south Manchester last night but despite a good soaking the word on the street from the city’s gallery and archives staff who have planned today’s removal operation, is that they can be saved.

Staff from the gallery and archives team rushed to the mural as soon as the unexpected downpour started and were relieved to see that despite being very wet, the vast majority of the messages were surviving the somewhat inclement weather, with only a handful looking a bit worse for wear.

After stabilising the display of messages last night and leaving notices around the mural to reassure members of the public, the team turned their attention to getting the additional support needed to help manage the delicate operation of removing the now very wet material from the mural.

A late-night call to salvage experts Harwell Restoration Services – the company who worked with the council to help remove and preserve all the thousands of tributes left in St Ann’s Square after the Manchester Arena tragedy – had them on board within minutes.

A team from Harwell’s will work with the council’s team today to help with the painstaking effort to carefully remove every one of the damp messages from the mural.  Once removed they will be taken by Harwell’s for freezing and drying at their facilities in Oxfordshire, before being returned – cleaned and dry – to Manchester Central Library’s archives in a few weeks’ time, where the process of recording and photographing each individual message will then begin.

Councillor Luthfur Rahman OBE, Deputy Leader, Manchester City Council, said: “This is Manchester, we’re not going to be defeated by a few drops of rain. And, because it’s Manchester, our fantastic gallery and archives staff were on site within minutes of the downpour starting last night to assess things and to do what they could to stabilise the mural display.

“The good news is that although everything is wet, we can fix this.

“In their favour is the fact that most of the heartfelt messages of support left behind at the mural have been written with marker pens or felt tips purposely for display, which means that luckily, despite last night’s rain, their heartfelt lines of support are completely legible and still speak volumes.

“We’ll be removing everything from the mural today as planned.  It’s going to take a bit longer, and it’s a bit more complicated now, but with a bit of extra specialist support to help properly dry all the messages, all will be well.

“Rain has not stopped play.  These wonderful messages with their shared outpouring of love, solidarity and tolerance will be saved, and will be seen and used in the future to help educate and show what standing together and acceptance looks like right now, in this moment in time, in Manchester.” 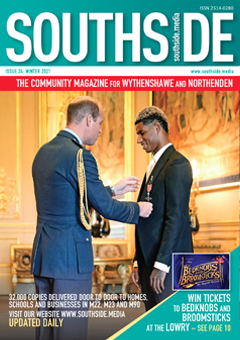